September Sports Month in the Archives - Hurling on Campus 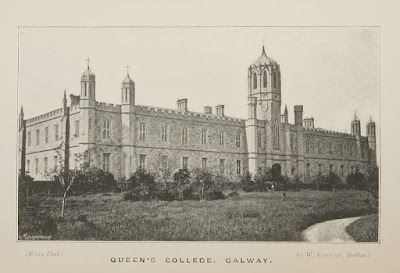 The month of September will be a special 'Sports from the Archives' month, where we will post a series of pieces featuring features and images from past victories and interesting stories from the sporting annals of the University. From hurling, camogie, soccer, Gaelic football, rugby, hockey, tennis and more, the series will-tie in with upcoming events such as the senior and minor All-Ireland Finals featuring Galway teams going for glory, the Galway camogie team playing in the All-Ireland final; the Rugby World Cup (Dare we to dream?!) with the team including a current NUIG student in the squad.

This first post will focus on G.A.A as this weekend all attention in the West will be on Croke Park. The hurler of Galway will face Kilkenny in the Hurling Final and our neighbours of Mayo will face Dublin in an all-Ireland Semi-final. As we look back into the archives it can be seen that hurling too time to embed and develop among the student population on campus but took home the honours of the FitzGibbon Cup for the first time in 1919. Sadly no photograph of this team is printed but the match notes record "This year marked the turning-point of hurling at UCG. It was the first time for the past few years that Galway turned out a FitzGibbon team, and we are glad to say, won the cup. Martin Fahy was a capable captain…" The competition was played in Galway and UCG beat UCC in the first game by 11pts to 4pts. In the next round Galway beat UCD 25 pts to 23 pts. Following the third round of games, all honours were even as Galway suffered a loss to UCD of 3 pts. With all teams even on points controversy would arise as the Cork team refused to hand over the cup, believing as holders from the previous year, they should retain it. UCG had superior scoring difference in the tournament and after much debate took the cup back to campus of Galway.

Following this win, as the notes from the student annual of 1922-23, UCG did not field a team for a number of years.
The hurling notes from an earlier student annual of 1916 show a further account of hurling on campus from the author under a pseudonym of 'Camán'. Typical of the time it is written in, the notes are strong in their sentiment of cultural nationalism and puts the GAA and hurling as a point of necessary revival. As well as sporting records, these accounts are interesting historical accounts of politics and society in the West. 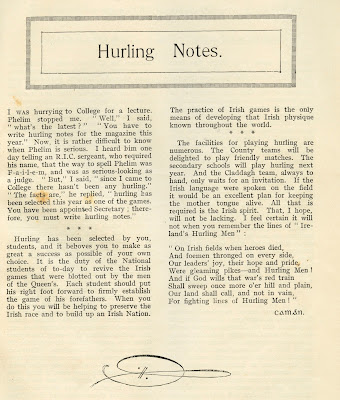 As the time draws near to this Sunday when the Galway team will take to the field of Croke Park in the hope of bringing the Liam McCarthy Cup back to the West, it is good opportunity to look back on past sporting achievements on campus and we will bring you more updates throughout September.
Posted by James Hardiman Library at 18:17