We are currently experiencing some problems linking to journal articles from EBSCO databases from within the Library catalogue. The problems happen intermittently, so you might not always have difficulty getting to EBSCO articles. When clicking the link to access an EBSCO article, you may find yourself landing on the EBSCO databases homepage, rather than the article you’re looking for. The problem is only for EBSCO journal article links, linking to journal titles from the catalogue is working normally. We’ve reported the issue, and our system providers are actively working on a solution. Please accept our apologies for any inconvenience this may cause you. As a workaround, take a look at the catalogue entry to see what journal the article is published in:   You’ll also find the Volume, Issue and usually Page Number for the article too. All you have to do now is do a catalogue search for the Journal title, and follow the link through to the journal homepage. From there yo
Post a comment
Read more

Christmas Entertainments [1740]. This pocket sized item comes to us, like some many other titles in this field, from the Delargy collection. This, the personal library of the renowned folklore specialist, Seamus Ó Duilearga [James Delargy], includes many rare titles, and was originally acquired by the library in 1981. The original edition of this book was published in 1740 but, as it was intended to be used to entertain around a winter fire, it was, as the later publisher asserts “thumbed out of existence”. It is full of fantasy tales of conjurors, witches and fairies. This nineteenth century reprint is itself a rarity now and harks back to a time when household entertainment depended almost exclusively on the oral tradition and the idea of Netflix or Now TV was far in the future! Alan Gailey. Christmas rhymers and mummers in Ireland (1968). In the same vein, this pamphlet reflects the work of one of the finest collectors of folk tradition in 20 th century Ireland, the late Ala
Post a comment
Read more

IReL   has recently purchased journal backfile collections from Sage, American Medical Association and Wiley on a p erpetual access basis. The Sage, American Medical Association and Wiley collections were chosen based on  usage denials  data: evidence that many IReL users had been attempting to read these articles but didn’t have access.  Access to the titles in these three journal backfile collections is now available from the   library catalogue. Collection Development
Post a comment
Read more

Trial access to all  Elsevier e-Books (29,989 titles) has been extended until  12th January 2021.  A complete title list is available  here. NOTE: Fulltext access is only available via the library catalogue.  Please log in to http://www.library.nuigalway.ie/ and search for the Elsevier e-book you wish to access.  We very much welcome feedback from staff and students on this trial of Elsevier e-Books. A link to a trial feedback form is available from each Elsevier e-book record on the library catalogue. Collection Development
Post a comment
Read more

The Library requests that academic staff submit module reading lists via the Reading List Service for next semester by Friday December 4th. This will give us sufficient time to: review the reading list purchase available e-books purchase print copies of new books process the digitisation of requested chapters/articles check e-links All reading lists must be created and published using the   Reading List System . This enables us to process the reading lists efficiently and manage the volume of ordering and digitisation requests. It also ensures ease of access for students via the Blackboard module.  There are a range of short helpful video tutorials as well as our  printed guide  available from our  Reading Lists Page .  Academic staff new to the Reading List Service, may be particularly interested in the the following tutorials: Creating and Structuring a Reading List Adding Resources and Publishing your Reading List Requesting a Book Chapter for Digitisation  (two chapter limit or 2
Post a comment
Read more

Birds of the World, Birds of NUI Galway

The Library has recently taken out a subscription to the Birds of the World database created by the Cornell Lab of Ornithology.    This resource brings together comprehensive, authoritative content from scholarly ornithology texts, sites, maps and images integrating all information into one central hub, including videos and audio clips of bird calls.  Birds of the World is the one of the most powerful ornithological resources ever created.  We decided to use the resource to show some of the common and less common birds that can be found on the University campus. A lover of water, there is a pair of Grey Wagtails residing at the stream that flows beneath the Concourse. The Grey Wagtail is a cousin of the very common White (Pied) Wagtail that bobs about the square in front of the Library. Another lover of water habitats, the White Throated Dipper  (or Dipper to his friends) is less common but a solitary one took up residence at the stream near the Bank of Ireland.    The Goldcrest
Post a comment
Read more
By James Hardiman Library - October 20, 2020 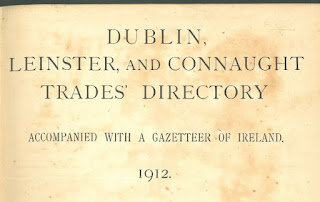 Trades and businesses in early 20 th century Ireland This month, as many of our business are fighting hard to maintain their customers through online and take-way trading, we take a look at some of the businesses that existed in towns around Ireland on the eve of WWI. The Dublin, Leinster and Connaught Trades’ Directory was published in 1912, under the imprint of the Trades’ Directories company, based in Edinburgh and Birmingham. It includes 227 pages of county-by-county detail of businesses in cities, towns and villages in those parts of Ireland. It provides a snap shot of the types of trading activity that went on all around the country at that time. Over 100 years later, we can see that some of these enterprises are still with us while others, due to the passage of time or changes in fashion or technology, no longer have relevance. This page from the County Galway part of the directory shows how even a relatively small village like Ballygar, close to the border with County Ros
Post a comment
Read more
More posts