An April Wedding in Galway 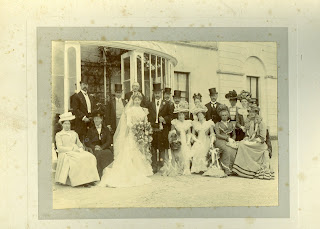 On 30 April, 1901 a wedding took place at the Roman Catholic church in Castlegar, three miles from the centre of Galway City. It would, perhaps, have been unusual for that church to see such a fashionable wedding party, accustomed as it was to the more restrained and plainer outfits of its parishioners, most from humbler or middle-class farming families. The bride on this occasion was Henrietta Kathleen Joyce, daughter of Pierce Joyce of Merview House. The eagle-eyed reader will spot that this photograph was taken in front of Merview/Mervue House, known to Galwegians in more recent times as Royal Tara China.
Kathleen was marrying a “neighbour’s child”: Thomas David Wilson-Lynch, of the Lynch family of Renmore House though at the time of his marriage he indicated he was living at Kilcornan House in Clarinbridge, the family home of his mother, Frances Redington.  Though he was the son of a family who had and still held a large landed estate, it is telling that Thomas recorded his profession as “local government inspector”, signalling the changing times that were then overtaking the landed gentry of County Galway. The witnesses to the marriage were Dr. Edward Stapleton and Lily O’Neill Power. Thomas and Kathleen had a daughter in 1906, baptised Catherine Anne Mary Wilson Lynch, afterwards known as Maureen, and in time she inherited the substantial archives of both the Wilson-Lynch and Redington estates. In the later 20th century she took the decision to deposit this archive in the James Hardiman Library where it is the collection known as LE6. While the archive is not, as yet, available in digital format, the detailed list of its contents can be accessed on the Archives Catalogue at

The descriptive list illustrates the breath of content of the collection, covering themes such as estate administration, social and political life as well as personal correspondence.
It is the largest of our landed estates collection and has provided the foundation for a number of studies including a monograph history of the Redington family of Clarinbridge by Joe Murphy (reprinted 2017 ) and articles by Geraldine Curtin (Galway Roots: journal of the Galway Family History Society, 1998) and Brigid Clesham (The Other Clare, 2001). In 2019 the archive was augmented by the addition of some photographs from the Redington family collection, including this splendid photograph of a Galway wedding that took place 119 years ago today.

Popular posts from this blog 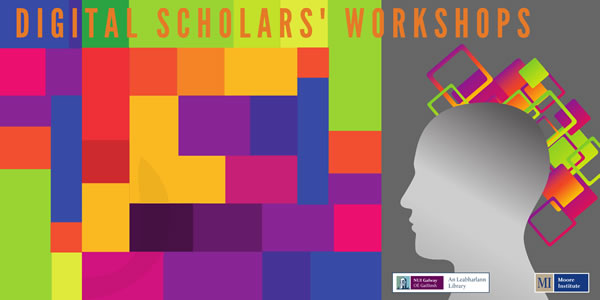 By James Hardiman Library - July 09, 2020
Covid-19 has brought both challenges and opportunities to the delivery of reading list material.   We are delighted that the number of module leaders making use of the Reading List service has greatly increased and we already have reading lists for over 700 modules for the 2020/21 academic year.   We greatly appreciate all the academic staff who have engaged with the service, you are helping us to ensure your students will have stress-free and seamless access to their readings.   If you have yet to provide us with your Reading Lists for 20/21, you can find out how to do so on our Reading List Service page. The challenge facing us now are those books that are not available for sale as e-books with institution-wide access, or that are only available at exorbitant costs.   We would like to share some knowledge of this challenge, so that you, our academic colleagues, can understand why it may be necessary to consider recommending different books to your students. Books that ar
Read more

By James Hardiman Library - July 14, 2020
The Academic Writing Centre is coming back this summer. We will be doing all our work remotely, and we hope this will enable as many students as possible to access our services. We will open on 15 July and will remain open until 26 August. Whether you are working on repeat assignments, theses, or other projects, you are all welcome to avail of the following services: 1. Consultations over the email:.  Please send a quick email to awctutors@gmail.com . We will get back with a list of questions about your project. Answer as many of them as you can. Expect a detailed reply within 48 hours. This method allows us to target our advice to your writing needs without doing the work for you. 2. Phone/zoom consultations.  At the moment we can only offer one phone consultation every 2 days.  They are only available to students registered with the DSS. To avail of those, please email awctutors@gmail.com . Include the paper you would like to work on (for up to 40 minutes), your phone
Read more